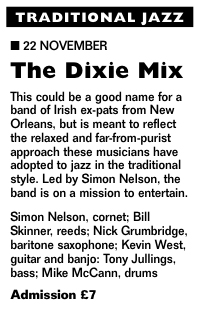 DixieMix began life as a pick-up band put together for Dereham Jazz Society who were looking for some traditional bands to widen the mix of jazz styles on offer at their Lakeside venue. The 2006 committee were agreed that "what we need is some Dixie in the mix" and contacted Simon Nelson, a young cornetist who was experimenting with the earlier jazz styles and whose inclination for his own playing was definitely pre-bebop. Simon put together the first band with the name of "The Dixie Mix" and they made their debut for Dereham Jazz Society on 22 November 2006.

The format was a success but at this time the band played solely for DJS and reconvened occasionally for a small number of pub gigs. Looking at the excerpt from the jazz club programme you can see that only two of the original players are still in the band of 2016. Kev West gets his long service medal any time soon!

Now shortened to DixieMix, the name more accurately reflects Band's choice of music. From the very beginning their book was not confined to a Dixieland straight jacket, but embraces an eclectic mix of jazz and swing from from the earliest days of New Orleans to the present time. 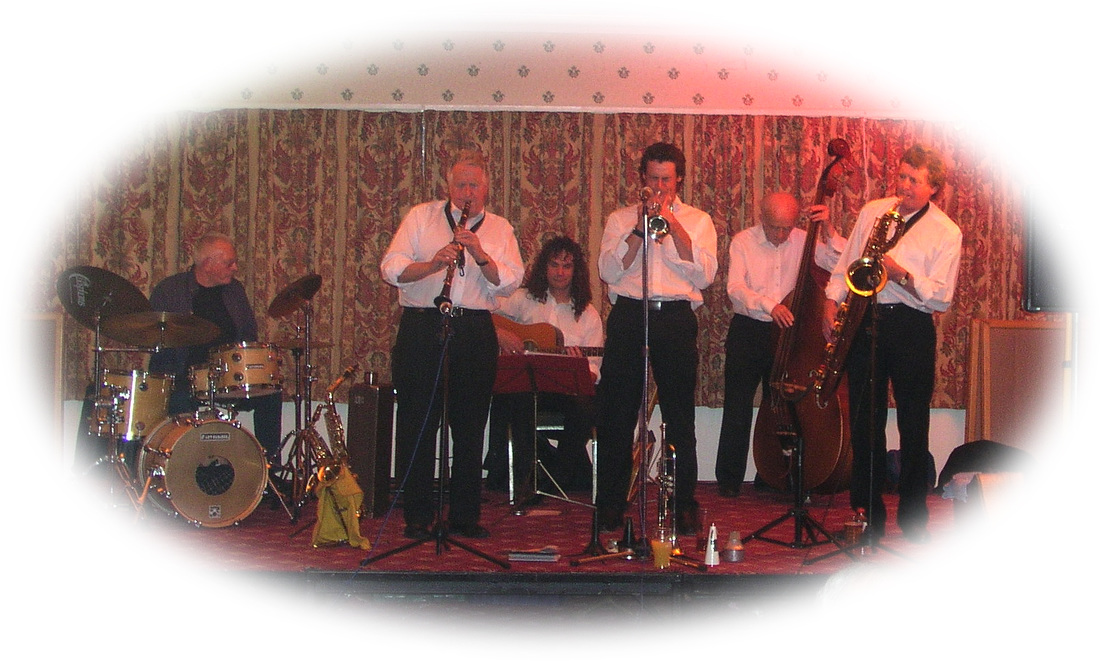 The impetus for putting the band on a regular footing came about when trombonist Chris Wigly contacted Simon. Chris was was looking for some musicians to fulfill a series of dates in his diary and thought that Simon's band could be the answer. The timing was perfect as Simon was thinking along the same lines. So with a few more personnel changes, DixieMix was set on the road to develop and grow into the polished, talented entertaining unit that it has become today. 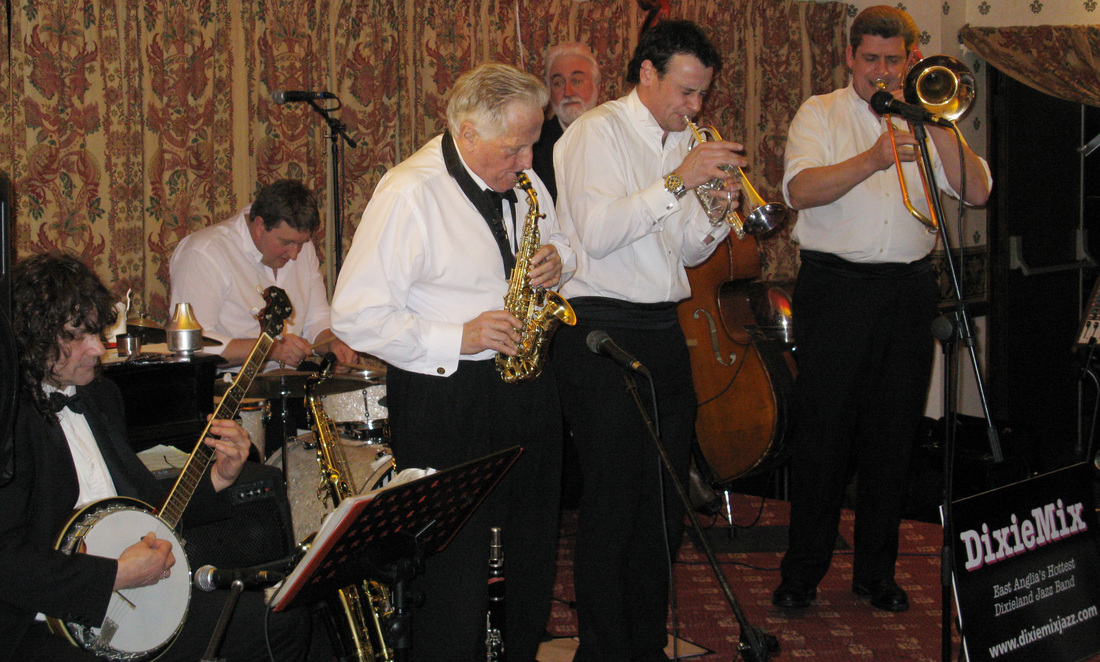 The second band, also pictured at Lakeside for DJS has Chris Wigley playing alongside Simon. Bill Skinner was still on saxophones and clarinet and Tony Wilkins had joined on drums, In this picture John Benson is depping for Tony Jullings on bass. John was later to become the band's full-time bass player and was responsible for establishing the red and black uniform that replaced the black and white.

Simon's original idea was to make DixieMix a permanent feature on the jazz scene and be a traditional jazz band made up of younger musicians. It soon became clear that the perfect formula would be a mixture of young and – shall we politely say – more experienced guys!

The line up became very settled over the next three years with only one change when Bill Skinner, on clarinet and soprano sax, went to live in Australia. This left the clarinet chair open for Mr Peter Oxborough who is one of the east's best known and hardest working reed men. Pete fitted straight into the line up and showed all the enthusiasm and drive of the youngsters! Simon took on the role of front-man and does this with a remit to entertain all comers backed up by first class musicianship. The band is fortunate to have a phenomenal rhythm section driven along on double bass by John Benson. John retired to Southwold after 25 years on the road with Kenny Ball and his Jazzmen. He is ably assisted by Tony Wilkins on drums and Kevin West on banjo and guitar. Three of the band’s members are also accomplished vocalists and all enjoy a song or two, maybe even throwing in harmonies to add a twist to some great Dixieland standards. In 2010 Simon was privileged to be asked to join The Stars of British Jazz and in between DixieMix gigs he was gigging and touring in the UK and Europe with some famous names from the heyday of traditional jazz.
In 2011 Dixiemix were proud to gain sponsorship from the award winning Woodforde's Brewery which enabled them to go into the studio to record their first professionally produced album “Nelson’s Revenge”. This was such a great success that DixieMix have completed three further studio albums to date and are working on the fifth.

The band’s popularity continues to rise, the diary is busier than ever and DixieMix fame is spreading further afield. Simon attributes this success to the band's wide musical influences. Ranging from the classic New Orleans style of the Buddy Bolden era through to the jump-jive of Louis Prima and everything in between, their music is always delivered with enthusiasm and good humour. This formula has been delighting audiences at festivals, clubs, corporate functions, charity events and concerts country wide.